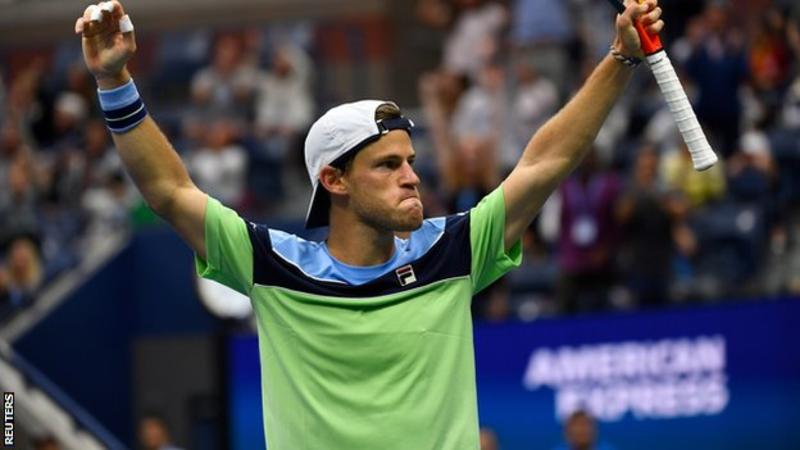 A frustrated Zverev was docked a point for an obscenity in the final set after earlier hitting a ball into the crowd.

Monfils, 33, broke serve six times and did not face a break point as he won in one hour and 26 minutes to set up a meeting with Matteo Berrettini.

Berrettini, 23, had failed to progress beyond the first round in two previous attempts in New York.

He served for the match at 6-5 in the third set and, though unseeded Rublev was able to break him for the first time, the Italian secured victory in the resulting tie-break.

After three lengthy sets featuring 10 breaks of serve, Schwartzman, 27, stormed into a 4-0 lead in the fourth against an out-of-sorts Zverev, who served 17 double faults and made 65 unforced errors.

Zverev clawed a break back but, following a previous code violation for hitting the ball into the crowd, he was then docked a point for an audible obscenity on game point, which gave Schwartzman a 5-2 lead.

The 22-year-old remonstrated with umpire James Keothavong, saying he had not heard the earlier violation because of the noise of the rain falling on the Arthur Ashe Stadium roof.

Zverev found some composure to win his next service game but Schwartzman was able to convert the second of two match points with a forehand winner.

The defeat means Zverev, the winner of last year's ATP Finals and seen by many as the leader of the next generation in the men's game, has still only made two Grand Slam quarter-finals - at the French Open in 2018 and 2019.

"Alex today had many problems with the serve, I am a big returner and I took many chances with that. I think I played great tennis," said Schwartzman.

The Argentine, who has lost all seven previous meetings with Nadal, added: "Rafa is my friend. It's always great to play against him in a quarter-final of a Grand Slam."