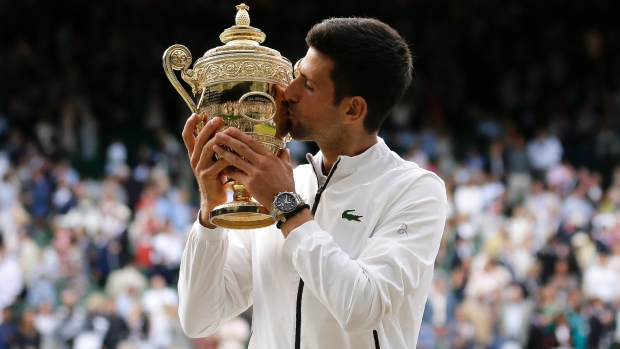 Novak Djokovic may not have been the better player from first ball to last in Sunday’s Wimbledon final.

But he summoned nerves of steel when it mattered most, blasting the shots, avoiding the costly errors and saving the two match points required to defeat eight-time Wimbledon champion Roger Federer, who had artistry and the Centre Court crowd on his side in his pursuit of a 21st Grand Slam title.

The 37-year-old Federer was the aggressor, hitting 94 winners to Djokovic’s 54, and he ultimately won more points (218 to 204). But it was Djokovic’s trophy to raise at the end of an exceptionally contested match that lasted 4 hours 57 minutes — the longest final in Wimbledon history.

With his 7-6 (7-5), 1-6, 7-6 (7-4), 4-6, 13-12 (7-3) victory, Djokovic claimed his fifth Wimbledon championship and the 16th major title of his career to pull within two of Rafael Nadal’s total and four of Federer’s all-time mark, which for now is paused at 20. It was Wimbledon’s first singles championship settled under the tournament’s new tiebreak format, which was instituted this year and kicks in if the fifth set is knotted at 12 games each. The format was instituted to prevent soul-sapping marathons such as the three-day affair between John Isner and Nicolas Mahut in 2010, which dragged on until 70-68 in the fifth set, and last year’s semifinal between Isner and Kevin Anderson, which lasted to 26-24.

Djokovic called it the most mentally demanding match he had ever been part of and credited the victory, which he acknowledged easily could have been Federer’s, to will power and the mental and emotional aspects of his game that he has worked so hard to strengthen.

“Most of the match I was on the back foot, actually,” said Djokovic, 32. “I was defending; he was dictating the play. I just tried to fight and find a way when it mattered the most.”

By Jim Gray from London, UK